Trees Now on Database, Prioritised, And Scheduled For Action 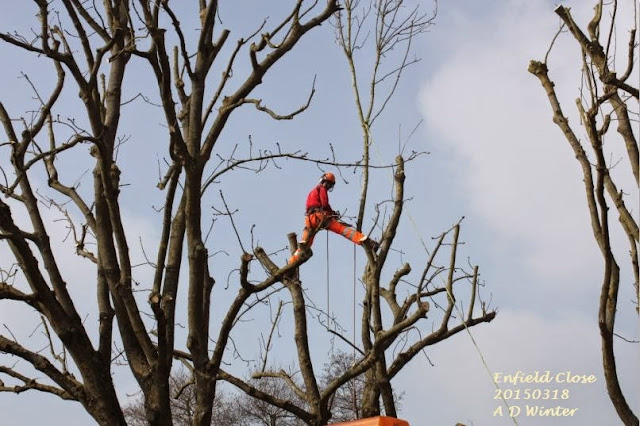 An officer from Central Bedfordshire Council attended a meeting of the Houghton Regis Town Partnership Committee on Monday 13th July to relay information to councillors about a tree survey undertaken across the district for them, by Landscape Planning Limited.

Altogether 5342 individual trees and 446 groups of trees under the control of CBC's Housing department had been surveyed. These were now either numbered as individual trees, as clumps, or simply unnumbered and noted as being in the grounds of their tenants gardens. The Council had now stored the whereabouts of these trees on a Geographic Information System.

1470 trees had been noted as requiring work; 475 of these were in Houghton Regis.  These had all been prioritised, depending on various factors. Recorded were details of tree types, height, crown spread, and stem diameter. In addition, the visual inspection enabled the recording of defects or other notable tree features.  Recommendations, where appropriate, were made to control any identified
risks and to assign a priority against recommended works (reference  document  p9).

Some priority 1 work had already been completed. Work on priority 2 and 3 trees was due to take place on those identified between early August 2015 and the end of March 2016. The work will be carried out on a geographical basis. The work on the trees was thought to have a price tag of about £100,000 and would be carried out by Amey Construction who have an existing contract with Central Bedfordshire Council.

The officer explained that the type of work being done would be low, overhanging, and dead branches being trimmed. He accepted that trees were an emotive subject, but was at pains to stress that the work would not prioritise 'loss of light' or 'fruit or leave droppings'. And there would not be large scale removal of trees. He indicated that where trees were in tenants gardens, the tenants had a responsibility to maintain them, but nevertheless the Council would be looking to undertake work that would be too much for their tenants.

In the past, the Council had had a budget of around £20,000 for trees and were reactive to things happening like high winds. In future, the Council would aim to survey a third of their tree stock every year to keep abreast of the situation.

Tenants should contact their housing estate managers. If you have an enquiry about a particular tree in a communal area, please note down the number of the tree and the location, and then contact Jethro Rolls who will be managing the tree works. jethro.rolls@centralbedfordshire.gov.uk telephone 0300 300 6488.

Central Bedfordshire Council is to hold a series of public drop-in events to share early plans for a proposed M1-A6 Link Road. The new strategic link road would run from the A6 Barton Road to junction 11a of the M1 motorway, joining up to the A5-M1 Link Road, to provide a strategically important east-west link.

The proposed new road would be 2.75 miles (4.4km) long and could create part of a northern bypass for Luton. The preferred layout would have a 50mph speed limit and be a mixture of single and dual carriageway, with junctions to a new Rail Freight Interchange at Sundon and proposed new housing development.

The existing A6 road has approximately 26,000 vehicles on it each day. A new link road would help to relieve current congestion and improve safety in Luton, as well as ease traffic on the local village roads used as rat-runs, such as Lower Sundon, Upper Sundon and Streatley. The plans also suggest a number of upgraded footpaths, cycleways and bridleways in the area.

2017 was a really difficult summer in Central Bedfordshire, where these individuals and their families moved from site to site across the authority area, causing disruption such as anti-social behaviour and large clean-ups which impacted on local communities.

The injunction bans 11 named defendants entering CBC authority area to camp. And 15 identified areas are for any persons deciding to camp there. This is indefinite for those areas, whereas the named persons part lasts two years.

The council has also been advising private landowners on suitable measures to take on their land. Additionally, they have been …
Read on ...

A police unit were in Tithe Farm Road this afternoon looking for further clues following an incident last night.

At about 8.30pm two rival groups are thought to have had an encounter during which time a gun may have been fired. Police attended the scene last night, and cordoned off the area for about an hour.

Neighbours to the shop at the junction with Leaf Road this afternoon said they heard noises "like a car back-firing", and another said "we heard several shots".

A spokesperson for Bedfordshire Police later said: “We were called to reports of shots being fired in Tithe Farm Road. “Officers attended and found an altercation had taken place between a group of men, who attempted to steal the watch and phone of another man. “An investigation into the incident has so far found no evidence of shots being fired. “The victim of the attempted robbery was not shot at but was assaulted during the altercation and sustained minor injuries.”

If anyone has further informatio…
Read on ...

Mother Of All Fly Tips Now Developing at M1 J12

Beneath Britain's busiest motorway, the M1, through delightful rural Bedfordshire, the mother of all fly-tips is being created.

Other content of this page moved to new page.
Read on ...

A temporary road closure of Sundon Road at Chalton is due to take place in the next couple of weeks that will affect traffic journeys between Houghton Regis and Lower Sundon. Diversions will be via Sundon, Marsh Farm, and Streatley.

Length affected:From jct with Luton Rd to Manor Road 5m past Church Rd junction
Please note there will be no access from Church Rd

Read the full text of this debate here

An irate resident has contacted Houghton Regis News Desk to vent their frustrations about visitors to the Chalk Pit clogging up their unadopted roads.

The resident, who did not want to be named, wrote, “As a resident on Fieldstone, we’re after some help. The quarry has been advertised on social media so it now has visitors from a wide area. They are blocking our residential roads, leaving rubbish and glass everywhere in the quarry. Having BBQs, drinking and meeting for social gatherings. They are drinking and dancing in the streets gone 11pm. There needs to be parking and the quarry managed before all the recent hard work is undone. We want peace back.

“This parking and quarry issue has been going on for the last few weeks after advertising has appeared on social media. We heard someone say they had driven from Milton Keynes, and a neighbour has stated that 5 people he knows from Hemel Hempstead have attended. Just this morning, a friend from work saw it …
Read on ...

- May 19, 2020
As part of the already approved outline development plans for the Lower Thorn area of Houghton Regis, detailed planning applications are now being submitted for a local centre. A decision for these applications is hoped for by mid-August 2020.

In all, three planning applications will be submitted to develop a local integrated centre on behalf of  HDD Houghton Regis Retail Limited. Two have been submitted, the third, for a care home, is pending.

1. 66 Bed Care Home A 66-bed care home and its associated car park, means of access and landscaping.  Split over 3 floors. If permission were granted, the applicants would hope to welcome residents approximately 12 months later.
Full details of this application can be found at the CBC planning portal and search for CB/20/01538/FULL or jump directly to the details at this link.

- May 20, 2020
A Caddington man has been jailed for five-and-a-half-years after killing a young boy on his bike on a crossing.

Michael Raffermati, 35, of Wren Close, Caddington pleaded guilty to one count of death by dangerous driving in October 2018.

At around 2.20pm on 20 October, emergency services were called to reports of a collision. 6-year-old, Zi Singh, was crossing the road on his bike with his father at a crossing point on White Horse Vale, when Raffermati hit him with his blue Vauxhall Astra. Singh was taken to hospital, where he died a short time later due to the injuries he sustained.

Yesterday (Monday) at Luton Crown Court, Raffermati was sentenced to five-and-a-half-years for causing death by dangerous driving, five years disqualification extended by 33 months, and he will have to take an extended re-test.

Sergeant James Thorne, from the Bedfordshire, Cambridgeshire and Hertfordshire Roads Policing Unit, said: “I would like to commend Zi’s family for the manner in which they have cond…
Read on ...

- May 15, 2020
Three people have been charged in connection with an incident in Houghton Regis which left a man with serious injuries.

Police were called to Hammersmith Gardens at around 6.40pm on Thursday, 7 May, following reports that a man had been badly injured. He was taken to hospital for treatment and is now in a stable condition.

Three people - Grant Melia, 40, of Southwood Road, Dunstable, David Warpole, 40, of Recreation Road, Houghton Regis, and Lisa Smallbones, 35, of The Ridings, Luton - have now been charged with causing grievous bodily harm with intent in connection to the incident.

Warpole has also been charged with arson and taking a vehicle without consent.

They have all been remanded in custody pending a court appearance on 8 June.

A fourth person arrested in connection to the incident has been released on police bail as enquiries continue.

Anyone with any information about the incident should call 101 quoting Operation Manchester or visit our online reporting centre.